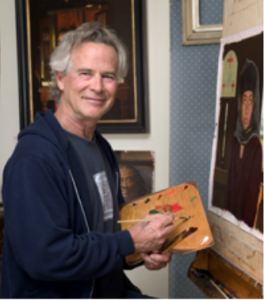 Dan Griggs designs and maintains the neat grove of his world. His southwestern-style home is painstakingly orderly. Decorating the eastern windows of his living room is a collection of visually-interesting detritus: a scarab beetle, colored glass orb, mouse skull, devil’s claw seed, polished stones, a black feather with a brilliant blue sheen. All the pieces are as carefully placed as a Zen rock garden, with not a spot of dust on them. In his life, Griggs is also organized and disciplined, with a minimum of the extraneous. Painting, gardening, yoga, tennis, flamenco guitar and reading are all neatly slotted throughout the week.

“When things aren’t in balance, I’m not a happy camper,”says Griggs. His ready smile still bears the enduring charm of a precocious child and he peppers his self-description with words like “compulsive.” His need for order also feeds his art.

“Wherever I rest my gaze, I want to find something that delights me; that to me, is beautiful or harmonious,” says Griggs. “I think that it certainly carries over into my painting, beauty, harmony and maybe a little mystery and intrigue.”

Griggs is also interested in ambiguity. “I think there’s a darker side of life for my personal tastes. I like to see both sides of the coin, not always light, not always dark,” he says.

His paintings offer hint of narrative that flirts with both beauty and a bit of horror, but the true meaning of his work is up for interpretation.

“I think it depends on the viewer, what’s in their minds and their past history and how they interact with the piece,” he says. “People can stand in front of a piece of my work and come away with different ideas of what it means. Some people may loath it some people may love it.”

Some of Griggs images can be quite evocative, according to Fred Fajardo, who is a collector, primarily, of abstract art from Canada and Spain.

“I’m actually kind of surprised that we would have portraits of people, because we actually don’t have any portraits of people, Dan’s are the only ones that we have,” Fajardo says. “The comment that we always get is that these are so different from all your other stuff, but they are really quite beautiful.”

Griggs’ oil paintings have shown across the United States, from the J. Cacciola Galleries in New York to Gallery Dorog in California, to the Dartmouth Street Gallery in Albuquerque. [His work is currently] on display at the Klaudia Marr Gallery in Santa Fe.

Eileen Braziel, director of sales at Klaudia Marr, discovered that gallery patrons have a distinct view of Griggs’ work. “They simply love the psychological aspects drawn from its mystery between models’ expressions, placement in a room and objects surrounding them,” she says, adding that his paintings somehow exult thought.

One of Griggs’ paintings is even reproduced on the label of Casa Rodeña’s award-wining wines; Rodeña’s trademark image of a woman in a veil listening to a seashell is a detail from an original oil painting by Dan Griggs.

“Dan is a totally dedicated artist,” says Howard Wexler, who taught Griggs at the Siegfried Hahn/Howard Wexler School of Drawing and Painting here in Albuquerque. Although Griggs’ work is often seen in collectors’ homes and galleries alongside post-modern art, Wexler trained him from the teachings of Horace Lecoq de Boisbaudran, a 19th century Parisian whose instructions have informed the works of Degas, Whistler, Renoir, Rodin, and Monet. “[Griggs] has a very disciplined approach, it isn’t hit or miss,” says Wexler. “He puts his all into his work and works very hard and it and has gotten very good results and very deserved success.”

The road to success wasn’t always smooth. Before he began his career as an artist, Griggs served as a marine and was injured twice in Viet Nam. He later worked as a counselor at the Veterans Affairs (VA) Hospital.

“I talked to wives of vets, daughters of vets, anything having to do with vets. I went crazy there, it’s a really stressful job, people in your face all day long,” says Griggs, who believes that part of the stress was also administrative. “It’s about money, and we were always in apologetic mode.”

Griggs was 28 and soon to be divorced when he met Wexler and Hahn. The opportunity took him in a new direction. “I could have looked the world over and not found a better teacher for what I like to do,” says Griggs. “These guys were real artists, and it didn’t matter if their plates didn’t match or they didn’t have a luxury car in the driveway, they were doing what I wanted to do… my whole life changed, really.”

While Wexler and Hahn did landscapes and still lives, Griggs said his subject matter, such as paintings of veiled nudes posed next to animal skulls, has always been edgier. Encouraged by his former teachers, he quit his job to become an artist full time, a decision Griggs hasn’t regretted.

“I’ve never lost my fascination for the job. Every day I sit in front of the easel, I get into my own space, you know, do the best I can,” he says. “I feel very fortunate to be able to do this as a living.”